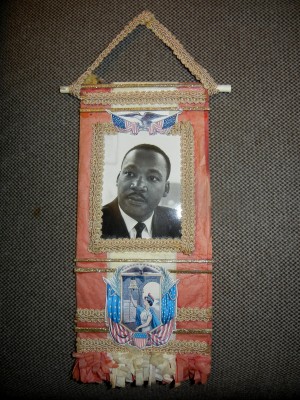 I found this treasure, a lovingly hand-crafted tribute to Dr. Martin Luther King, Jr., at Seattle Washington’s Fremont Flea Market, circa 2000. I felt compelled to rescue it and give it a home in my collection. As one of many who believe in the total equality of humans, I feel I owe a debt to Dr. King. Having a way to pay homage to him in my daily life, by displaying this in my home, is gratifying.

In my mind’s eye, I see this object being created in a church basement, or a schoolroom, or even in the activity room of a senior community such as the one I reside in. It could be one of a kind; or perhaps dozens were crafted that day, in a group setting. I thank the individual who created this. I affirm his/her obvious love and respect for Dr. King.

I also wonder how and why it fell out of their hands. –Think of all the things you’ve owned during your lifetime. Maybe you made some of them with your own hands; perhaps when you were a child. Certainly, some of these things had great meaning to you at one time. But then one day, you decided to “thin things out”, to “down-size”, and you let go.  But then, in a totally contradictory manner, you visited a flea market and bought someone else’s castoff, which you now treasure as if it were always your own. 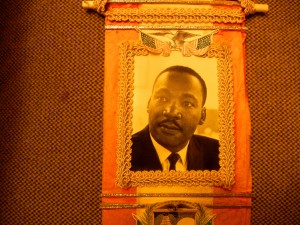 The simple construction framing Dr. King’s photograph is composed of red and white crèpe paper and mass-produced edging material. The Victorian-style patriotic banner and panel are reproductions or modern interpretations which are not actually of that vintage. While the style doesn’t fit the era Dr. King lived in, it’s fitting that his image is paired with a classic patriotic theme.

In trying to attach a date to this beautiful piece, I note that it has a certain 1970’s feel to it, not counting the use of faux-Victorian-era decorations. When I found it, the red crèpe paper was already faded from exposure to light. The red and white crèpe paper fringe has curled with age. Being a collector, rather than an expert on ephemera, I will only suggest this was made in the mid-late 1970’s or early 1980’s. Regardless, it’s a loving tribute to Dr. King, which places him in a historic, patriotic context, showing him the respect he deserves.

I believe it was during the summer of 1981, when I marched with hundreds of other citizens up Seattle’s Empire Way, a busy street which wound through Seattle’s Central District; our rallying cry being a plea to city leaders to rename Empire Way to Martin Luther King, Jr. Way. After much debate, and then a delay due to a legal challenge, this change was finally made on January 15, 1984. “MLK Way” now winds through the area. — Suffice it to say, I did not casually choose this piece; I felt an immediate need to obtain and share this.

In past years, I hung this creation over my desk at work, during Black History Month (also known as African-American History Month), and specifically on Martin Luther King, Jr. Day. I enjoyed sharing it with co-workers, and during the rest of the year, with visitors to my home. And now, I’m honored to share it with you.

Here is a video filmed at the NW Regional Folklife Festival, in May, 2013, where I performed Bob Dylan’s “Blowing In The Wind”, the song that Peter, Paul and Mary sang at Dr. King’s “I Have A Dream” speech, at the March On Washington. The song helped change the world: