I saw Santa Claus sitting at a table in front of Seattle’s Uptown Espresso last Sunday. I exited the great-smelling shop with a delicious pastry I had just scored. It was a rare treat for me, because I have to watch my pennies. — But there he was, sitting at one of the outside tables, eating chicken from a plastic container. I turned to him and said, “Merry Christmas!” He said it right back to me. I figured we were on good footing, so I asked if I could take his photo. (The whole purpose of my outing was to walk to the Seattle Center Armory, to take mass photos of a tuba orchestra that was presenting a free Christmas concert.) He asked, “Why do you want to take my picture?” I replied, “Because you’re Santa Claus, and I believe in you”. He said, “Well I guess so. Go ahead”. He seemed like he thought my request was odd.

I fetched my camera from my knapsack, and went through the usual motions one would go through when taking someone’s photo. — Like giving them time to look up and smile for the camera. But he wouldn’t look at me, or smile. — Just as I was snapping the photo, he said, “Give me five bucks”. I said, “I’m sorry. I’m just a pensioner myself. I’m retired; but I believe in you”. He looked disappointed. Then he just went back to eating his chicken.

I turned away and started walking down the street. I only had a few minutes  to get to the concert. When I’d traveled maybe fifty feet, I heard him bellow, perhaps to me; perhaps to the whole world, “Merry Fucking Christmas!”

So: I wound up seeing two more Santa Clauses that day. (That’s something that’s confused me since I was a boy: how can he be in so many places at once?)

I saw him playing the tuba at the Christmas concert (see below): 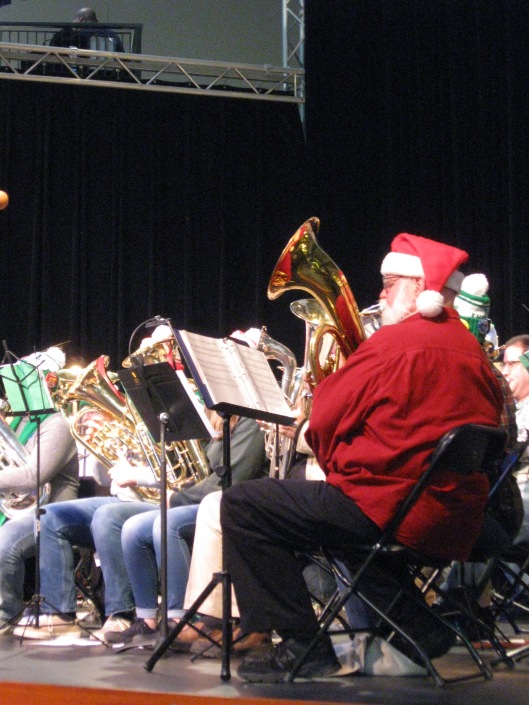 And then, I saw him in an even odder setting: he had installed himself on a throne, in front of a huge semi-truck which was emblazoned with the Coca-Cola logo: 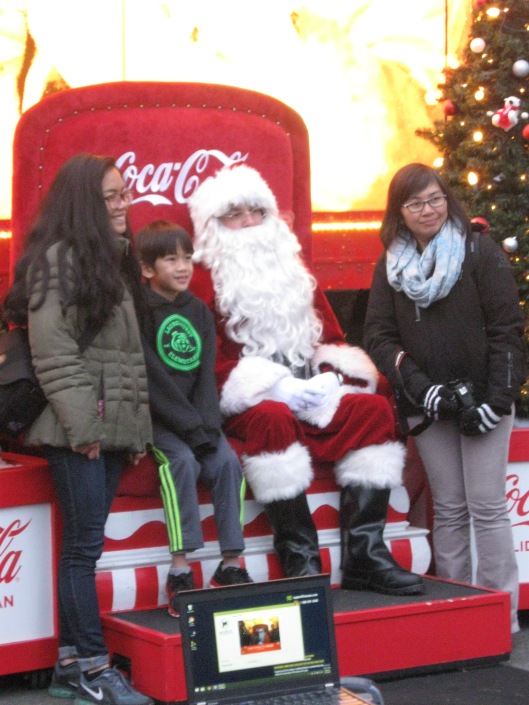 I only hope he had gotten himself into a better mood! 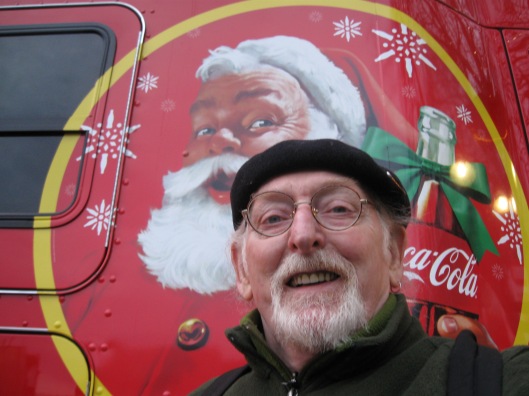 Merry….Gosh-darn Christmas from your humble scribe. — I regret not owning a red beret. And yes: when I was in my thirties, I was an official Northgate Mall Santa in Seattle, WA.