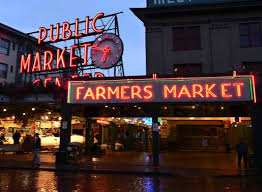 I remember: it was a chilly winter afternoon at Seattle, Washington’s legendary Pike Place Market. The date was early 1975. I was engaged in singing and playing folk songs on my  huge Ovation guitar for whomever happened to pass by. Shoppers, older folks and tourists have perennially loved visiting the Market to pick up some fresh produce, see the colorful sights, rub shoulders with one-of-a-kind Market characters and yes, to listen to the famous Pike Place Market street performers. 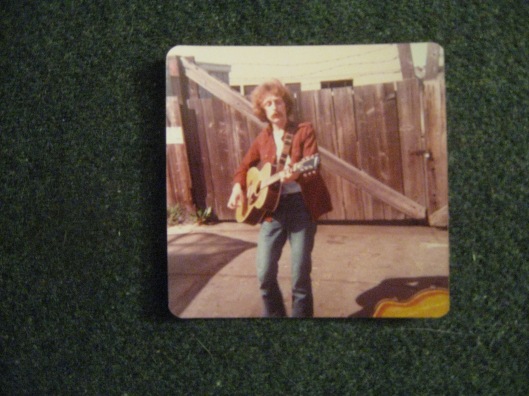 I was performing in order to earn as much money as I could, because I was in-between bands, and I had no nightclub gigs. I’d lived in Seattle less than a year, having moved to the amazing city from the little town of Yakima, Washington in hopes of ratcheting up my music career, which was going nowhere in Yakima. I’d played every nightspot in that town, many times over, and I had come to realize that the only thing left to do was to relocate to the larger city located on the other side of the Cascade Mountain range. It was taking a while to become established in the Seattle music community; so in the meantime, I played for coins and the occasional dollar bill, which were dropped into my open guitar case by passersby. In other words, I was “busking”.

I was playing at the north end of the market. As it was getting later into the afternoon, fewer and fewer people were walking by as I sang. I wasn’t making any money. The temperature was dipping; I was pretty chilled. I was thinking about calling it a day, thinking of catching the bus back to my little studio apartment located near Seattle Pacific College.

Suddenly, one of my Market buddies approached and gave me a heads-up: he said had spotted the great movie star, Lauren Bacall, of “Bogey and Bacall” fame, touring the Market. He reported that she was near the middle of the market, headed in a southerly direction. I quickly put my Ovation in its case, and walked briskly to the far-south end of the Market.

I saw that no one was playing at the Market’s best busking spot: under the famous clock. I hurriedly uncased the Ovation, strapped it on, and started singing my signature song” it was a piece I penned, entitled “Cascade Mountain Girl”. I had sung about one verse, when I spied Ms. Bacall coming my way. Making sure to sing in my very best voice, I poured everything I had into my song. The song tells the story of a man who loves his “Mountain Girl”, with whom he lives, far away from civilization. However, he decides he needs to move to the city, in order to find success (just as I had done). The song conveys the longing he feels for his Cascade Mountain Girl.

Ms. Bacall came to a standstill, stood and listened to the rest of my song, smiling at me. When I finished singing, bringing the song to its dramatic end, I said to her, “God bless you”. With a sincere look in those beautiful eyes which lay beneath her famous Bacall eyebrows, she replied in a sultry voice, “Well, God bless you!” Flashing her gorgeous smile one last time, she was gone. But not only did she share a little Hollywood magic with me that afternoon; she let me share a little Pike Place magic with her.

In summer of 1975, while I was still trying to scratch out a living at the Market, I entered the Grand Ole Opry’s 50th Anniversary Talent Search. Appearing at the Seattle Center House with a great live band backing me, I finished in first place for the Puget Sound region. A tape of my performance was sent to the Grand Ole Opry for screening, along with dozens of other tapes. The Opry judges designated me a North American Continent West Coast finalist. Radio station KAYO, my local sponsor, flew me to San Diego, California, where I competed against nine other acts, originating from British Columbia to the California-Mexico boarder. Singing “Cascade Mountain Girl”, I finished First Runner Up. When I returned to Seattle, my musical career took off like a rocket!

The first Pike Place Market Performer button ever issued: mine!

I’ve continued to busk at the Market during rough patches. However, times have changed: it’s no longer possible to live on the money received from busking at the Market (unless, perhaps one has really cheap, shared housing). But I still get goose bumps every time I open my case and start a new performance, surrounded by the spirits of so many good people who have inhabited the Pike Place Market.

Pike Market artist Sketcho Mutcho made this sign for me in 1974. I have used it ever since, when I play for tips.