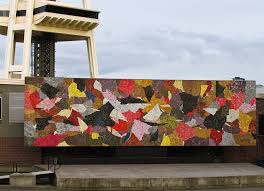 On August 9, 1995, the day Jerry Garcia passed away, impromptu gatherings took place all over the world. As word of the passing of the great genius behind “our band” spread, people just naturally came together, to mourn, and to pay tribute. In my town of Seattle, Washington, Deadheads gravitated to Seattle Center, to gather and console each other, and to dance to Grateful Dead music on the Horiuchi Mural Amphitheater lawn. 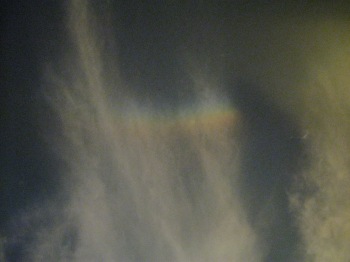 It was a warm, dry, sunny Seattle evening. I chanced to look up, and I noticed there were “sun dogs” all over the sky. They appeared as little curved arcs of prismatic color. (Sun dogs happen when it is not raining; they are created when the sun’s rays shine through cirrus, or ice crystal, clouds.) The sun dogs resembled “smiles” in the sky. One young man remarked, “Look! Jerry is smiling down on us!”

There were newspaper photographers in attendance, who were taking pictures of those of us who were gathered together. I approached one, and said, “Look up! Take a picture of that!”. He didn’t. Well, I did. Here it is. Jerry was smiling.

Two photos from later that night: 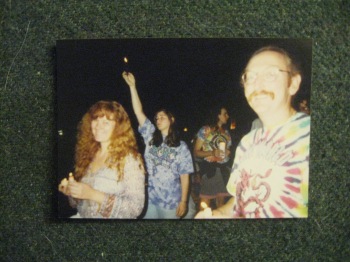 The author in his tie-dye, with other good folks. We made friends with the sweet young woman on my right. 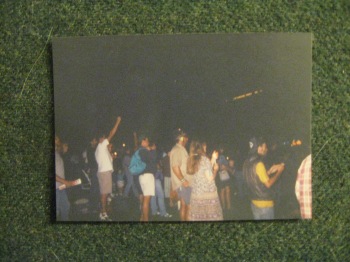 There was a good-sized crowd.