I was strolling up the sidewalk (some stroll down; I stroll up!), just a couple of blocks from the city center, in my town of Seattle, Washington in 1988. I was simply making my way to the bus stop, having finished my shift at The Bank of California, Seattle branch, where I was employed. It was a sunny day. It was a routine day. – Nothing out of the ordinary; with nothing on the horizon to change that, as far as I knew. 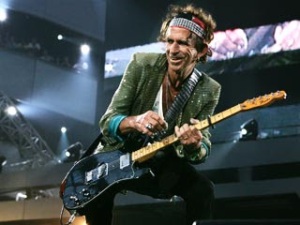 And then suddenly, I saw the Rolling Stone’s Keith Richards leaning casually against a large tree, where he was engaging in conversation with a rather scruffy, but well-mannered dude. Keith himself was wearing a full-length black leather coat, which was probably the most expensive item of apparel I have ever seen a gentleman attired in. He actually looked like a king. But, a king who had lived a very, very hard life. I mean, his history was written all over his face….

I didn’t want to intrude, so I hung back a few yards. But, I wanted to say hello, so I decided to wait until the two men were finished conversing. Well, they had a long talk! I was amazed at the amount of time Mr. Richards gave this person. — And impressed. I could hear their talk. It was about – wait for it – the Rolling Stones! The guy obviously knew a great deal about the band; he was certainly a real fan. I stood there, waiting patiently; they eventually wrapped up their visit. When the other fellow walked away, Keith cast his eyes on me.

My first-generation Stones logo patch, made in 1971.

I’m fickle. If this had of been George Harrison, who of course was among the living at that time, or Sir Paul, I would have been just staggered. — And speechless. But it was Keith Richards. And although I have a first-edition tongue and lip design logo patch which I’ve treasured since 1971, when my Mom kindly sewed it onto my jean jacket; plus I had a 1975, black Fender Telecaster Custom, just like Keith’s more famous one, and used it in several Seattle bands, including the long-lived Stampede Pass, I was not the world’s biggest Stones/Keith fan.

But still, I wanted to say something. So, when he turned toward me, I simply said, “God Bless, Keith”. He replied in a sincere tone, “God Bless”. I felt like that was all I needed, and I didn’t want to take up any more of his time. So giving him a friendly nod and smile, I went on my way.

Then, it hit me. I had just shared a blessing with one of the icons of rock n’ roll! — A living legend.  I had previously appeared with the one and only Willie Nelson while a member of Stampede Pass, and I’d performed on a TV show along with the Hudson Brothers in 1967, as a member of the teen group I helped start, the Velvet Illusions. Mark Hudson produced/co-produced nine Ringo Starr albums. So I was used to being around some of music’s leading lights. — But still, there was only one Rolling Stones, and only one Keith Richards. When this dawned on me, I felt very euphoric – very happy.

As I turned the corner, I saw three people walking in my direction: a very tall, hefty gentleman, a strikingly beautiful woman, and a middle-aged, long-haired guy, who was holding her hand. I figured this was my chance to impress some fellow hipsters. So, addressing them, I said, “Hey, I just talked to Keith Rich— and then I realized that the long-haired guy, who, by the way, reminded me very much of a helium balloon – he looked like he would float away if his female companion let go of his hand – was Ron Wood, the Rolling Stones’ own guitar player! I was embarrassed and thrilled, at the same time! — We all laughed.

I walked on down the road. Doubly-blessed.

After I got home, and while watching the local news, I caught a story which featured two Seattle women excitedly relating their tale of having visited with Mick Jagger himself, in downtown Seattle, right around the same time I ran into Keith and Ronny.